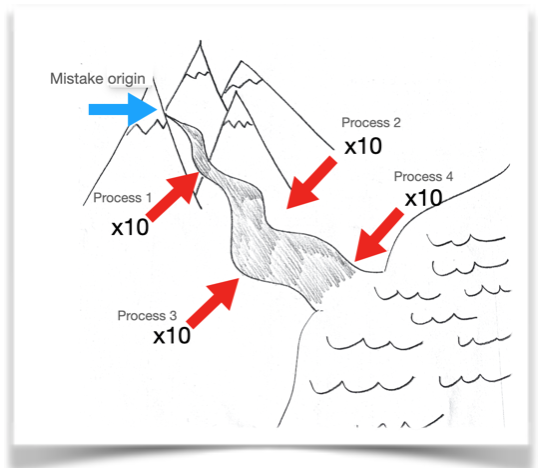 If you have a shop with more than one person in it i’m willing to bet there isn’t more than a four hour stretch where you don’t see a mistake happening, find a mistake that happened, or find yourself making a mistake. Typically, when mistakes are mentioned to
the poor person who made it, the catchall phrase is “we’re all humans, and humans make mistakes”.

I think this phrase is so popular and widely excepted because like every good lie there is an ounce of truth to it. The real question is “do you believe it?” Think of the last few mistakes you’ve encountered, upon reflection do you truly believe there was absolutely nothing that could’ve been put in place to prevent that mistake from occurring? The saying “hindsight is 2020“ only exists because upon reflection, our amazing problem-solving human brain can always think of a way that any outcome could’ve been much better. The real question is “how do we turn hindsight into Foresight?” Believe it or not
the answer is very simple, and you probably already know it. The implementation on the other hand is the one area where most people struggle along their lean journey. What is it you ask? “It’s elementary my dear Watson”, standard work.

Oh, there it is. The eye roll or the big sigh, because deep down you knew you weren’t gonna like the answer. Overcoming any difficult task takes one thing: motivation. Most of us can be motivated by many different things, however there is one universal
motivator that no one in business can avoid… money! There’s two ways of looking at mistakes. What not making mistakes would save you, but
this would be a hypothetical calculation of a future event that has not occurred. This leaves our ‘spidey’ senses tingling that it may not be accurate, therefore motivation is low for going through the pain of fixing it. The other way of looking at it is: how much do mistakes actually cost? To answer this we have thousands of years of historical data that leave almost no room for feeling the calculation is in accurate.

Let me take you on a trip to Japan for the answer. I was first exposed to the true cost of a mistake while studying with Ritsuo Shingo, (son of Shigeo Shingo co-creator of the Toyota production system) 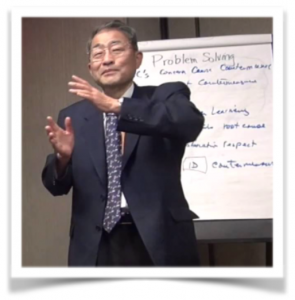 He drew a sketch on the board telling a story of a river that starts as melting snow on a mountain top, it then flows down to a river that meets the ocean. He drew arrows each time the river got wider. This example is analogous to a job moving through a factory. Starting as a concept where no work has been done yet, as in the unmelted snow
on the mountain. All the way down to where the river meets the ocean, the ocean being a final destination, representing a completed job.

The Japanese are experts at teaching valuable and powerful lessons through simple and easy to relate
to stories. I have to show anyone this example where they haven’t fully understood the meaning behind it, and could easily relate it to their particular situation.

Each time a mistake passes to the next department or process the cost to repair it is a multiple of x10. 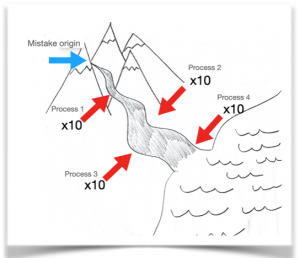 Yes, you heard that right x10! Toyota learned long ago the counterintuitive principle of high quality is
actually cheaper to produce in the long run. This is why a total focus on eliminating mistakes and being
defect free will always produce a higher quality product at a lower cost to manufacture.

If numbers aren’t your thing, then just imagine the effort required to stop the water at
each level. At the top, you only have to prevent a drip, easily done with one finger tip.
Near the end of the river, the undertaking to stop that water would be nothing short of a
monstrous undertaking.

An easy example would be something that an engineer could have fixed in the drawings for $10 in labour. If that mistake reaches the shop floor, it’s $100 to have someone on the shop floor figure it out, rework or remake the parts and catch it up to the rest of the job. If that mistake manages to escape the shop floor and get to the job site, it’s now $1000 to fix.   I’d be willing to bet my bottom dollar everyone reading this article can relate to a mistake that led to one extra trip to a job site. I may even be surprised to find out through eliminating predictable mistakes we all couldn’t shave one day off each install. So now the math is easy “how many jobs do you do in a year“? if you have a factory that does one project a day not creating standard work and adhering to it it’s costing you $220,000 per year!

I surmise if a company works diligently on root cause analysis, implementing standard work that illuminates mistakes while they are still a snowflake on a mountaintop, after one year you will double your net profit.

If you’re in a competitive market and you don’t take the time to muscle through the pain and confusion of creating standards, but your competition does, you probably won’t have to worry about doing it… You’ll be out of business. 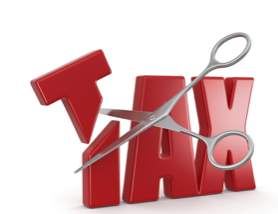 The whole world universally agrees we hate sales tax when we buy something. Think of mistakes as an additional tax you’re charging to your customers every time you ship product.