The lesson we’re about to discuss in this article as one I really could’ve used
about 30 years ago when I got started in manufacturing.
A large percentage of businesses grow organically over time, and quite often
there hangs a picture in the office somewhere of the founder working away in a
garage.
And as a business grows, you need people. If you so choose to continue to
grow the business, Sooner or later you will need people to supervise the people,
and depending on how big you get, you may soon find yourself in need of people
to manage those people, and so on and so forth until you have a long list of job
titles like these: team member, team leader, group leader, supervisor, manager,
COO . I think this list could be endless but I’m sure you get the idea.

Now just as important as leading those people, is picking the ones to lead. We
will just use cabinet makers For this example, but it applies to any department,
organization or business for that matter.
I’m generalizing, but I think most of us like to promote from within. Someone
who’s been with the organization a long time, understands the products,
understands the process and can answer just about any question anyone might
have. As you start to fill the organization with people that particular individual
seems like a good fit to be the team leader. So what do we do? We put them in
charge!

Now let’s say they’re doing a satisfactory job. The company keeps growing and
soon you have CNC departments assembly departments, finishing departments,
engineering departments etc. Each one of those departments has a team lead,
but it’s a lot for you to manage so you decide it’s time for a group leader who
effectively is in charge of all of your team leaders. Again, you need someone
who knows the business inside and out and your cabinet maker turned team
lead, who’s been with you for years now seems to fit the bill, after all he’s doing
quite well in his new role. So, once again. We put them in charge!
It feels great to promote people from within, reward them for their hard work and
doing such a good job, it just seems like the right thing to do. But is it?
Let’s keep going shall we. Several years goes by the company continues to
grow and now we need a general manager to oversee all the operations. Guess
who we picked for that job? You got it, your awesome cabinet maker!

Now during his ascent up the ladder there were grumbling’s along the way, but
we chalk that up to people just complaining about their boss, after all the trade-off
of having such a knowledgable person in charge helps you to sleep at night.
Have you ever heard of something called “the Peter principle“? Here is the
Wikipedia definition:

The Peter principle is a concept in management developed by Laurence J.
Peter , which observes that people in a hierarchy tend to rise to &quot;a level of
respective incompetence&quot;: employees are promoted based on their success in
previous jobs until they reach a level at which they are no longer competent, as
skills in one job do not necessarily translate to another.”

So we take someone who’s really good at something and keep moving them up
the ladder until they’re no good anymore, then at that point they never get
promoted again, no one likes to be demoted, so there they are…. Stuck. And
this totally explains how so many bosses are perceived as idiots. Probably they
are not an idiot, they are just one rung on the ladder too high.
So how do you build these people to lead your lean organization? It’s simple, you
don’t. You cannot train a lean leader, you have to find them. If I had a nickel for

every person I promoted that eventually ended up telling me I didn’t train them,
I’d be rich. A lean leader seeks information, runs face first into a problem and
their first reaction is to read a book on the solution. They are humble, never
satisfied and constantly surprising you. If I had to do it all over again, the #1
quality I would look for would be: someone who is always learning because they
want to.
Please don’t confuse this with you cannot nurture a lean leader, mentor them,
sent them to learn from other organizations. You absolutely should do all of
these things. But you will be wasting your time if they weren’t born with the lean
leader foundation in their soul. They are a special and rare breed, but they are
out there, it just takes some intentional digging to find them.

Here are some tips for a basic structure as your organization grows;

should be able to just call for help at their station, and help arrives via “the team
leader”. When it comes to improvements, the team members should be
empowered to make on the spot improvements, but if its something that is
technical or may effect other people, that should be brought to the team leader
for approval and consensus. 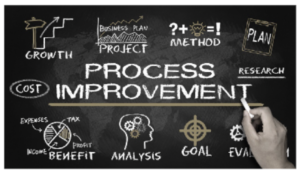 Team leader role is to support all the activities of the team members. Answer

questions, remove barriers, coordinate the work. A simple goal for the team
leader is to maintain flow and keep everyone at their stations. If someone has to
go wandering around the shop for anything, thats a sign the team lead missed
something. The team leader should also be assistingteam members on their improvements.

Depending on the boundaries set by management, they also wouldbe working closely with

group leaders on the larger process improvements. They should be teaching and
coaching the team members with a keen eye for future team leaders.

Group leader role is setting targets with management and developing plans to
achieve them. Delegating specific tasks to achieve those goals, monitoring team
leaders performance and making course corrections as necessary. Group
leaders should also be removing the barriers preventing team leads for hitting set
targets. A large part of group leaders role is training, coaching and mentoring the
team leaders in all aspects of lean &amp; general manufacturing principles. Their
goal should be to develop future group leaders.
Next time your about to promote someone, make sure they are the character
qualities your looking for, not just the technical skill. A great cabinet maker may
end up being a terrible leader. Remember the “Peter principle” and you will be
well on your way.